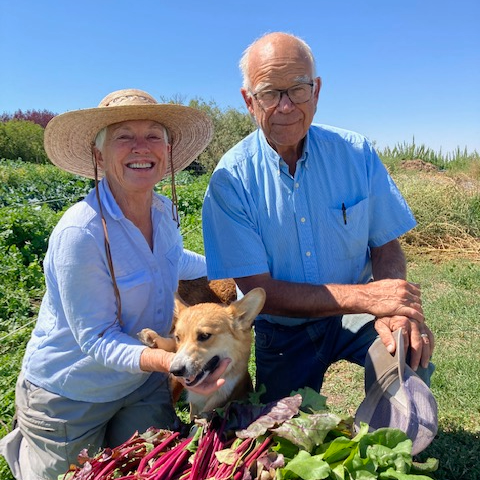 Melinda and Dick Springs helped jump start our local food movement in 2007 when they founded the Wood River Sustainability Center, an indoor farmers market and gathering place for people to exchange ideas about food.When the COVID pandemic hit this spring, the couple sprang to action, turning their South Bellevue property into a vegetable production farm to provide fresh seasonal vegetables for The Senior Connection.

Here's what Melinda and Dick had to say when asked about their passion and purpose:

When and why did you become interested in the local movement?

Dick’s earliest memories are those from his grandmother’s farm, collecting eggs, raising turkeys, and picking watermelon. Growing up on his family farm, he helped his father in the garden and cider making was a weekend fall activity. As an adult he became a cattle rancher, including raising vegetables for his family. Melinda grew up in the city (Seattle) but always imagined being able to live on a farm, grow her own food and raise farm animals. Our higher education experiences taught us how to problem solve, and gave us the confidence to do whatever we set out to accomplish. In the early 2000s, we became interested in the Locavore movement, which had started in San Francisco. We read Michael Pollan’s book, The Omnivore's Dilemma, and knew we wanted to promote many of his ideas to interested people in Blaine County.

What inspired you to start the Wood River Sustainability Center?  ‍

In 2004, we had a small meat CSA (Community Supported Agriculture). We were looking for additional freezer space as our business was growing. John Sofro showed us the old Forest Service Maintenance Building on River Street in Hailey.  When Melinda walked into the building, she exclaimed, “This is much more than freezer space.”  We looked at each other and realized we could start a year-round indoor farmers' market in the building, and so it began.

What changes have you seen since you’ve been involved in the Wood River food movement?  ‍

Fifteen years ago, the movement was just on the fringes. Now, it’s much more mainstream and visible to Blaine County residents.

Why did you start a production garden this year?

When we returned from the Sawtooth Ski Festival in Stanley in March, COVID-19 had made its appearance in Blaine County. It became quickly obvious that we were going to be farm-bound for an indefinite period of time. Normally, we would have started to make plans to go to Canada to our saltwater retreat for the summer. But the Canadian Border was soon closed to U.S. citizens. So we decided we needed a project that would keep us occupied on the farm. We got together with two of our closest friends, Peggy Grove and Mardi Shepard, and started to imagine what it would take to create a garden on the farm, capable of feeding ourselves and others in the community. We were inspired by the thought that we could grow enough produce to be able to make a sizeable contribution to one of the non-profits in Blaine County.

What are you doing with all the fruits and vegetables that you are growing?

We are donating the bulk of our production to The Senior Connection.  The remainder is feeding the four of us.

What have you learned about food production in the Wood River Valley?

It’s challenging! Dealing with freezing temperatures in the middle of summer as well as frequent windy days has presented unique challenges for vegetable production.

What is your favorite food to eat from the garden?

Our favorite food has been the tomatoes, but closely followed by the eggplant and beets. But we are quick to say that we have enjoyed every single vegetable and herb that we have produced. There’s nothing like fresh homegrown produce!

For this area, meaning high-altitude gardening and its short season, we have found that the root crops are the easiest with which to have early success.

Who is your food hero?

What change would you like to see in the Wood River Valley region in terms of food?

We would very much like to see local processing plant(s) for local meats and vegetables and a small-scale creamery.

What is your vision for our local food system?

We would like to see the Valley become more self-sufficient in food production and, as a result, more affordable to the entire local population.