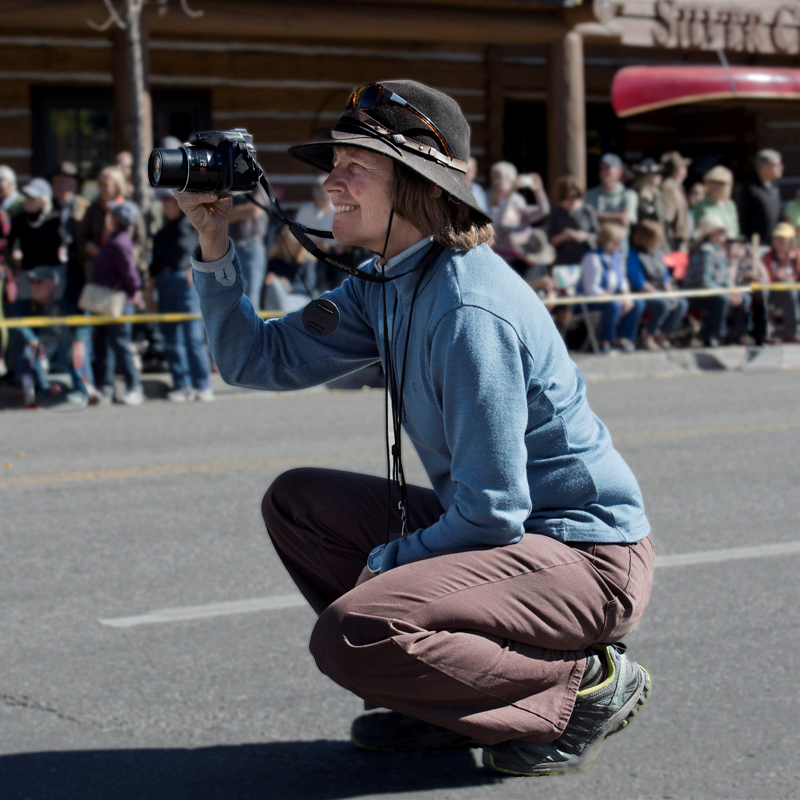 When there's a compelling story to be told about local food and farms, journalist Karen Bossick is on the scene, armed with her trusty notebook and camera. Karen has been covering the local food beat for more than a dozen years as a reporter for the Wood River Journal, The Weekly Sun, Magic Valley Times-News, Sun Valley Magazine, and her most recent gig, Eye on Sun Valley. Her acute observations and detailed reporting bring vivid life to every colorful article that she writes

LFA: What is your background as a journalist?
KB: I wrestled between pursuing a career as a social worker or a journalist. Given my immense enthusiasm for writing research papers—and the thought that I might be able to move more mountains as a journalist— took up the typewriter, which became a personal computer within a week when I went to work for the Idaho Statesman.

Following an internship at the Knoxville News-Sentinel, I chose the Idaho Statesman out of dozens of offers because of its proximity to the intriguing-sounding Sawtooth Mountains. I also have written numerous articles for publications like the New York Times, USA Today, Sun Valley Magazine and even Western Horseman, in addition to serving stints with the Wood River Journal, The Weekly Sun, and Magic Valley Times-News, for which I still write stories.

LFA: What’s your definition of good food?
KB: Having grown up food insecure, I have to admit that good food to me for many years was anything that filled the tummy. But I have definitely grown an appreciation for fresh local food since moving to the Wood River Valley, and learning about its benefits via the Local Food Alliance and other organizations that have tried to bring such foods into focus.

LFA: Can you share a memorable story from your childhood related to food or farming?
KB: In first or second grade, they rewarded us on the last day with a scoop of ice cream. Having never had it before, I was so excited to share it that I took it home without eating it. It was, of course, a pile of melt by the time I reached home, but I never forgot it. And it spurred me on to a job with Baskin-Robbins. I’m much quicker to eat my food today!

LFA: How did you get interested and involved in the local food movement?
KB: As a reporter, it’s hard not to get caught up in the enthusiasm and hard work of those who are encouraging schoolchildren and others to eat healthier and more sustainably. Given the benefits—healthier people and a healthier environment—how can you not get interested?

LFA: Describe your ultimate meal made with local ingredients.
KB: Ohmigosh. So much good out there. I would start with green Mexican ground-cover tomatoes from my friend’s garden—they’re so sweet and delicious right off the vine. Next, the beet salad that I once had from Café Della. I would create an entrée using local kale and chicken in the manner of Perry’s quinoa salad, augmented by a slice of the seed bread made by Hangar Bread with flour grown and milled by Hillside Grain. For dessert: A delicious apple tart using  local apples. And to wash it all down, a refreshing shrub cocktail prepared by Roadbars.

LFA: How can community movements, like the local food movement, benefit from the press’s involvement?
KB: Nothing happens unless people know about it.

LFA: Who is your food hero?
KB: Whoa! I have so many, dating back to Kaz Thea, who was on the forefront of Idaho’s Bounty, and Paulette Phlipot, who showed me how food could be downright sexy with her food photographs. Of course, people like Ali Long, Stacy Whitman, Amy Mattias, Jeri Howland, Aimee Christensen and Manon Gaudreau and even Kathryn Guylay and her Rainbow Foods. The folks at the Hunger Coalition are working hard to get better food on the dinner plates in the valley. And I applaud Tammy Davis, as well, for the way she has brought community together around her community Thanksgiving dinners over the years.

LFA: What change would you like to see in the Wood River Valley in terms of food?
KB: My prayer would be that we can somehow make the price of locally grown items so comparable to that of imported food that everyone can avail themselves of fresh, local foods. It’s a shame when people have to fill their bellies with other, much less nutritious food, to avoid going hungry.